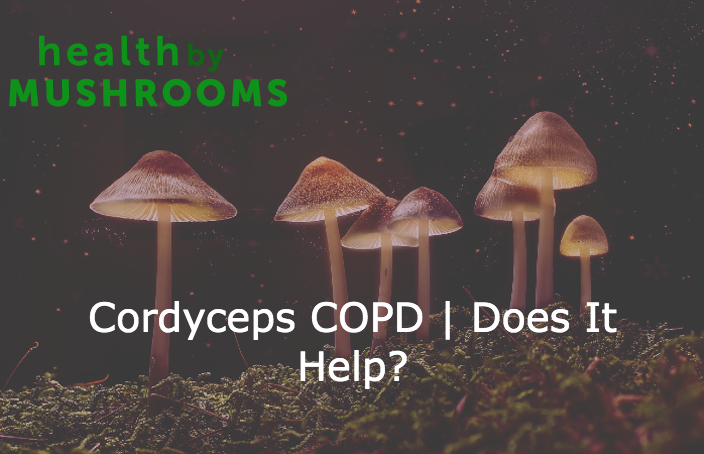 Cordyceps mushrooms are becoming increasingly popular, with people looking for a natural remedy to help with their lung health. While there are various supplements for respiratory health on the market, Cordyceps contains a variety of beneficial bioactive compounds which offer a number of health benefits, including supporting the health of your lungs. Cordyceps mushrooms can help support an open airway, which allows free, easy breathing. They have the potential to be an effective supplement to treat shortness of breath and other respiratory problems.

Can Cordyceps Mushrooms Help With COPD?

A meta-analysis has concluded that cordyceps may be a promising treatment for patients with stable COPD of GOLD Stages 2-3. Although more studies are needed to make a final conclusion, since there were no adverse affects from Cordyceps, on top of many other benefits that one could experience while using cordyceps, it may be worth adding to your supplement stack.

Before you decide to speak to a healthcare provider about trying cordyceps to aid in your respiratory health, here’s what you need to know. Cordyceps mushrooms are powerful medicinal mushrooms that have a long history of usage throughout the Far East and in South America. With more than 400 different species known today, you will find Cordyceps around the world, from China and Japan to Brazil and the United States. Traditionally, these mushrooms have been used to help maintain energy levels and healthy sexual functions, and for health of the bronchial, pulmonary, liver, and kidneys. Researchers are working to understand each of the 400 species of cordyceps and to determine the best ways to use them for health benefits in humans, including using as supplements to help with pulmonary health.

Respiratory Health Is An Increasing Concern

Thanks to environmental influences and the toxins that are present in our surroundings, there is an increasing concern about breathing health. Many folks are struggling with seasonal issues, since these can be caused by a variety of sources, like foods, plants, animal waste, chemicals, medications, and even particles in the air around you. Seasonal challenges are essentially an overreaction by your immune system.

It goes into full-scale war mode in order to combat what it believes are potentially toxic invaders, when they are in fact benign. It may trigger reactions in your respiratory and digestive systems, as well as potentially spreading to other parts of your body, such as skin and lymph nodes. How your body responds to seasonal irritations will vary between individuals, and may change throughout the year, because our bodies and environments change, too. Using supplements for your lung health may help you adjust to these changes in environment and your body.

The beneficial characteristics of cordyceps mushrooms have been studied in a variety of ways in recent years, and these studies show promise. While additional clinical data is still needed, several of these preclinical studies found links between cordyceps and improved lung health. This means that taking a supplement with Cordyceps could help to maintain pulmonary health and enhance breathing function. They may also be used as lung supplements for smokers, and can aid with supporting the lungs when trying to stop smoking.

Seasonal challenges include the activation of an immune cell called a mast cell, which may release histamines and other immune cells, potentially damaging the body. Thymic Stromal Lymphopoietin (TLSP) is a epithelial-derived cytokine that is the primary mediator of mast cell development and activation. Studies conducted in vitro suggest how cordyceps mushrooms can greatly inhibit the activation of TLSP, thus maintaining the homeostasis of the body. Other studies show the effects of these medicinal mushrooms on aiding the body in breathing health, since they relax bronchial walls and contribute to increased oxygen utilization efficiency. These benefits, as well as the small, gentle nature of potential side effects of cordyceps lung health supplements, make the fungus helpful for any circumstance in which increasing or improving lung function is of importance.

Cordyceps Mushrooms as an Immunomodulator

Cordyceps mushrooms are known for their capacity to support the immune system, and are considered to be biomolecular immune modulators. They help the body adapt more effectively to immune threats and maintain healthy inflammatory responses, both of which are critical to promote airway health. Just like other medicinal mushrooms, these mushrooms are powerful adaptogens and immune-supporting agents, helping protect against the threats of your everyday environment.

Human and animal studies show cordyceps and other fungus-based supplements have significant effects on athletic performance. One of the ways that Cordyceps is thought to do that is by supporting pulmonary function. It turns out this mushroom makes an ideal lung health supplement in people who have breathing problems, but it can also help people who have healthy lungs to enhance breathing to benefit in sports. While further studies are needed, animal and human data indicates that cordyceps soothes excited bronchial tubes and supports healthy breathing functions.

Some animal studies indicate that cordyceps can increase adenosine triphosphate (ATP) production in the body. ATP is the molecule essential to providing energy to your muscles. Increasing your ATP can help your body optimize its oxygen usage, particularly when exercising. This can help you perform exercise at higher intensities longer.

In a study of 30 healthy older adults, researchers tested the effects of cordyceps on endurance during exercise. Half the participants received 3 grams of a synthetic strain of Cordyceps called CS-4, and the other half received a placebo. After 6 weeks, the CS-4 group increased its VO2 max by 7%, whereas the placebo group was unchanged.

VO2 is a measure used to determine how much oxygen your body can absorb while exercising.