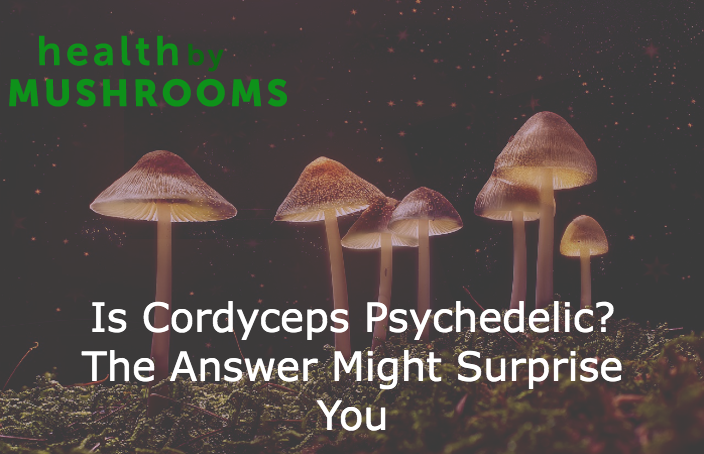 The mushroom has long attracted scientific investigation. But as with many fungi in recent years, people are constantly asking the question when learning about cordyceps and it’s benefits for the first time, but they wonder, is cordyceps psychedelic?

Cordyceps is not psychoactive in any way, meaning it has no psychedelic or hallucinogenic effects. Although it has a range of great health benefits from improving you immune system, and most notably improving oxygen and ATP utilization throughout the body which can aid in athletic performance. And not to mention the great research being done showing it may help stave off cancer.

We did hear about something called microdose stacking, and some people are using cordyceps for this purpose to help improve their energy levels when microdosing psychoactive mushrooms. So an example stack would be cordyceps, vitamin B12, and psilocybin.

For one thing, they are known to offer diverse and potent collections of compounds called secondary metabolites, which aid their competition in the wild. These compounds have already provided us with an array of life-saving drugs, like antibiotic Penicillin, the chemotherapy treatment Taxol, and the cholesterol drug Lovastatin. Many types of mushrooms are sold as supplements in the United States, as ground powders.

Laboratory experiments, meanwhile, usually extract the biologically active compounds using ethanol, specific enzymes, or other agents that appear to enhance their positive effects. And although recent epidemiological studies have identified a possible link between eating mushrooms regularly and a reduced risk of cognitive decline, researchers are hoping to integrate potent compounds from mushrooms into more targeted treatments. For now, the vast majority of studies have looked at the effects of fungus extracts and specific isolated compounds in cells and rodents, as well as in comparatively small samples of humans, so any conclusions are still way too early. This fungus parasite genus is known for getting pretty nasty. For instance, one species, Ophiocordyceps unilateralis, can invade an ants body through spores and transform it into “zombies” before reemerging from the insects head.

Fittingly, cordyceps has even inspired a horror video game series with zombie themes. Despite their intimidating behaviour towards insects, humans have long valued these fungi, which look like Cheetos. Chinese medicine has used Ophiocordyceps sinensis species to promote pulmonary and renal health at least since the 18th century. The wild forms of O. sinensis, grown on ghost moths on the high Tibetan plateau and Himalayas, can sell for as much as $63,000 per pound. Research teams thus typically examine samples of the species that have been cultured in laboratories.

In recent years, different varieties of cordyceps have been studied for their anti-inflammatory, anti-cancer, immune-system-regulating, and neuroprotective properties, among others. Their different powers are thought to stem from a unique compound called Cordycepin, together with polysaccharides and sterols that are in some ways similar to the cholesterol produced by humans. Experiments on animal models suggest the compounds inside cordyceps may help alleviate learning and memory disorders, symptoms associated with neurological diseases such as Alzheimers and Parkinsons. This may happen via various mechanisms, including the Cordycepss ability to prevent neurons from dying.

Is Cordyceps Safe to Take During Pregnancy?